A big argument about today’s media content revolves around the issue of whether violence in the media affects the perceptions of children. Sternheimer (2003) discusses one assumption in her book, It’s Not the Media, arguing that violence in the media can ultimately result in death in certain situations. One of her arguments involves children not being able to understand the difference between fantasy and reality. Due to children’s inability, many time children imitate what they see in the media. A study was done by Albert Bandura in 1963, commonly known as the “Bobo doll” experiment (Sternheimer, p. 68). In this experiment children were split into two rooms. One set of children were shown a video of an adult hitting a Bobo doll whereas the other children were not. The results showed that those who viewed the violent video, acted out and they themselves were violent to the Bobo doll (Sternheimer, p. 68).


But these results were controlled based and did not reflect anything that was going on in society. To prove this assumption, Sternheimer (2003) discussed several real life examples. The first example involved a twelve year old boy who killed a six year old girl using wrestling moves he had seen on television in 1999 (Sternheimer, p. 69). The boys stated he was imitating the wrestlers on television and claimed “he did not know what he was doing would hurt” the girl (Sternheimer, p. 69). The other example involved two eleven year old boys who got into a fight at the movie Valentine in 2001. One boy was stabbed and ultimately died (Sternheimer, p. 70). In both of these cases the results were deadly. Many believe, including Sternheimer that it was the violence in the media that influenced these tragedies. One issue is, that many feel more investigation needs to go into other causing factors of violence besides the media. Although Sternhiemer argued that imitation hypothesis (essentially cultivation theory ) is not the only reason for reenactment of violence. Other factors have to do with family, parenting, and home environment.

After reading both Sternheimer’s (2003) thoughts as well as other outside opinions, we agree with this assumption. One piece we found to be very interesting and useful, was the study done by Centerwall (1989), in which she compared homicidal rates in the United States, Canada, and South Africa. She studied each individual country’s homicide rates before and after the introduction of television (1975 in South Africa), and she found that after the introduction of television, the rates doubled (Centerwall, 1989).
http://www.rcgd.isr.umich.edu/aggr/articles/CCLS/CCLS.11.pdf 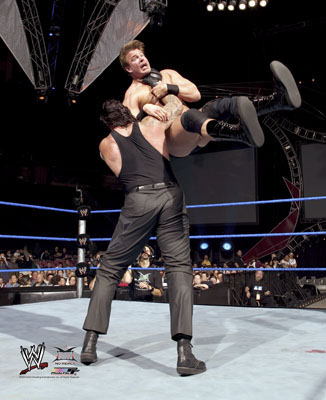 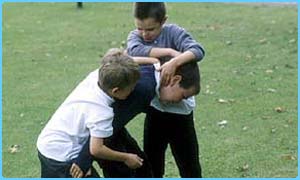 A "choke slam" on television may not be real, but the consequences from the children viewing will be.

This example explains Sternheimer's (2003) arguments how children cannot understand the difference between fantasy and reality. A Seattle news article reports how a 10 year old boy passed away after his friends buried him in a sandbox after watching an animated television show called Naruto. McNerthney and Rowe (2008) reported that the fifth- grader wanted his friends, who ranged from 8 to 10 years old, to bury him head-first. The boys friends explained how they initially thought he was kidding when he started to thrash his legs around. When the children finally realized that he was in trouble, they were too late and he suffocated (Seattle News, 2008). Tragic stories such as this, provide evidence that children do not understand the consequences of actions that they see on their favorite television shows


Another example which supports the assumption that media can ultimately result in death in certain situations and that children will imitate what they see in the media, is the controversial show Jackass on MTV. In every episode, real people would perform ridiculous stunts. Many of these characters would be hurt, however others would laugh at the pain. Although this show did provide a disclaimer and presented real consequences for their actions, many viewer felt it was "cool" to recreate each stunt. Over the years Jackass aired, many children were injured or killed because they wanted to be like the Jackass characters. For example "one 13- year-old suffered severe burns after setting himself on fire to imitate a 'Jackass' stunt. Another group of teens drove a car over one of their friends, again emulating the show" (CNN, 2001). Shown in this YouTube clip, teenagers reenact the most popular stunt called "shopping carts". These boys believe they are on Jackass, they even call each other by the real Jackson character names.


Luke Hadley and friends filmed and posted their own Jackass/ Wrestling stunts on YouTube. They explain how they have a high tolerance of pain and it is entertainment, so why not film it. This You Tube video shows different stunts they performed and how they hurt each other.

Sternheimer's (2003) assumption where children are prone to imitate media violence can be directly related to the "Mean World Syndrome," we learned about in class. While children continuously consume endless amounts of violent media, their ideas about the real world can be greatly skewed. They can begin to develop a false sense of reality, and perhaps feel that the world is way more violent than it actually is. Certain consequences that can arise from these situations are children and adolescents acting violent towards other people or things, because they feel they are constantly at risk to certain things. In reality, these children are not typically at greater risk to any violent acts, but because their minds have been molded to believe so, they can in essence act violently which can lead to deadly results.

In the link above, there is a page dedicated to ten instances where people have died because of video games. Some of these deaths involve disputes over video games, violence with video game equipment and murder resulting from playing video games. In one case the person reenacted the hit video game Grand Theft Auto which resulted in the death of several police officers. When the man was reprimanded, he was quoted as saying, "Life's like a video game. You've got to die sometime" (Spike).

Anderson et al (2003) noted that “aggressive primes or cues make aggressive schemas more easily available for use in processing other incoming information, creating a temporary interpretational filter that biases subsequent perceptions. If these aggressive schemas are primed while certain events—such as ambiguous provocation—occur, the new events are more likely to be interpreted as involving aggression, thereby increasing the likelihood of an aggressive response. (p. 95) This explanation could also be applied to the February 2001 movie stabbings in Massachusetts. Anderson et al (2003) also offers an explanation as to why violence influenced by the media during adolescents is a reoccurring theme . They said “frequently primed aggression-related thoughts, emotions, and behavioral scripts become automatically and chronically accessible”( p 95).

Experiments in the Research

Anderson et al (2003) note several experiments in their research when children were randomly assigned to play violent or nonviolent video and observed their behavior afterwards. “Most of these studies found that the violent game significantly increased youths’ aggressive behavior. For example, Irwin and Gross (1995) assessed physical aggression (e.g., hitting, shoving, pinching, pulling at clothes or hair, kicking) between boys who had just played either a violent or a nonviolent video game. Those who had played the violent video game were more physically aggressive toward peers”( Anderson et al, 2003 p. 91).

In this link, a news article reports on two teenagers are arrested and charged in the death of a 7 year old girl. Heather Trujillo, who is 16 years old, and a male friend reenacted a game of Mortal Kombat on her younger sister Zoe. Heather told police “she was on top of her sister ‘holding her arms down with her leg while tapping on her chest like a typewriter when the victim passed out’” (Rocky Mountain News, 2007). Video games such as Mortal Kombat increased aggressive behavior in these teens which resulted in a tragic, real life situation leaving a child dead.

Sternheimer, K. (2003). It's not the media: the truth about pop culture's influence on children. Boulder, CO: Westview Press.